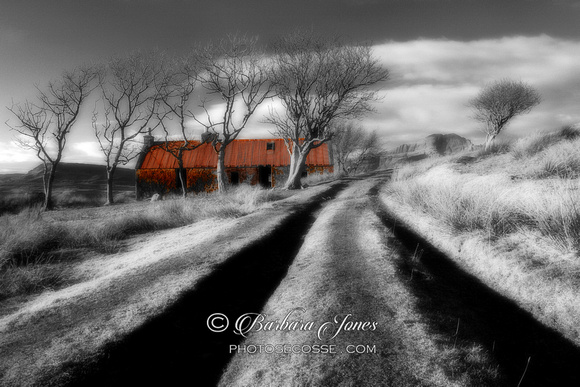 Suisinish is the site of a clearances village, reached from a very rough track from Kilbride by Torrin, Isle of Skye, Scotland. This is an old farmhouse, abandoned.

The Clearances were when Landlords in the 19th century brutally evicted families from their homes to make way for Sheep, which were more lucrative. Many people had their homes and belongings burned by the unscrupulous Factors.
Starvation went hand in hand with their poverty and homelessness.
A great deal had emmigration forced upon them, which helped to populate America, Canada and Australia.
An horrific episode in Scottish History.
The cottage in view is not a clearance dwelling, but a more modern farmhouse. The area around is however, covered with the tumbledown ruins of where once upon a time, Mothers watched their children play......
Canon EOS 20D, f/22 @ 18 mm, 1/6, ISO 100, No Flash
©Barbara Jones PhotosEcosse
User Agreement
Cancel
Continue