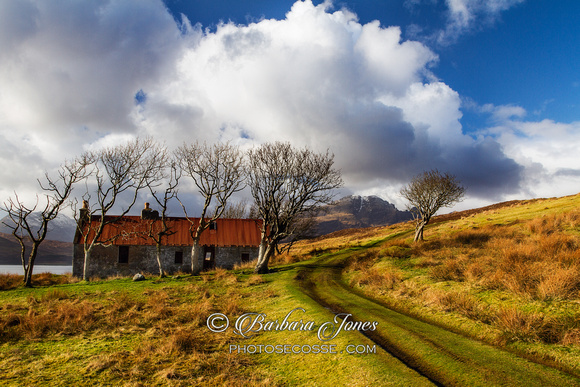 Tremendous cloudscape over Blaven, of the Black Cuillin. Seen from Suisnish, near Kilbride, on the Strathaird Peninsula, Isle of Skye, Scotland, site of a Clearances village. The ruin in view is more modern, an old farmhouse.
I believe it was abandoned in the 1950's, though I am not sure. I would appreciate it if anyone has info on this old cottage ?

"" The families who lived here were driven out forcibly. Many of the elderly died as hundreds were evicted into the snow that lay there in October 1853. The houses were razed to prevent their return and they had to find shelter as best they could in the open. One old crofter returned to the ruins during the night and was found dead from exposure in the remains of his home the following morning. ""
Canon EOS 7D, f/16 @ 24 mm, 1/20, ISO 100, No Flash
photosecosse.com
User Agreement
Cancel
Continue